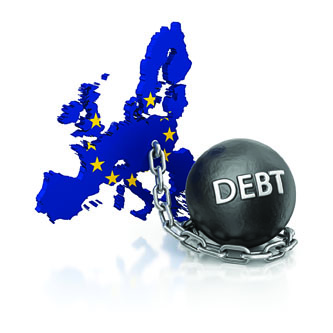 Sovereign Default: Failure by the government of a sovereign state to pay back its debt in full.

Under the doctrine of sovereign immunity, the repayment of sovereign debt cannot be forced by the creditors and it is thus subject to compulsory rescheduling, interest rate reduction, or even repudiation.

The only protection available to the creditors is threat of the loss of credibility and lowering of the international standing (the sovereign debt rating) of a country, which may make it much more difficult to borrow in the future.

From late 2009, fears of a sovereign debt crisis developed among fiscally conservative investors concerning some European states, with the situation becoming particularly tense in early 2010.

This included euro zone members Greece, Ireland and Portugal and also some EU countries outside the area.

Iceland, the country which experienced the largest crisis in 2008 when its entire international banking system collapsed has emerged less affected by the sovereign debt crisis as the government was unable to bail the banks out.

In the EU, especially in countries where sovereign debts have increased sharply due to bank bailouts, a crisis of confidence has emerged with the widening of bond yield spreads and risk insurance on credit default swaps between these countries and other EU members, most importantly Germany.

While the sovereign debt increases have been most pronounced in only a few euro zone countries they have become a perceived problem for the area as a whole.

In May 2011, the crisis resurfaced, concerning mostly the refinancing of Greek public debts.

The Greek people generally reject the austerity measures and have expressed their dissatisfaction through angry street protests.

In late June 2011, the crisis situation was again brought under control with the Greek government managing to pass a package of new austerity measures and EU leaders pledging funds to support the country.

Concern about rising government deficits and debt levels across the globe together with a wave of downgrading of European government debt created alarm in financial markets. 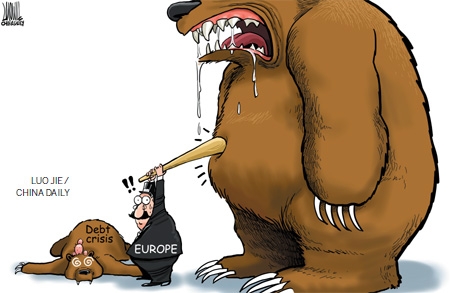 In 2010 the debt crisis was mostly centered on events in Greece, where the cost of financing government debt was rising.

On 2 May 2010, the eurozone countries and the International Monetary Fund agreed to a €110 billion loan for Greece, conditional on the implementation of harsh austerity measures.

The Greek bail-out was followed by a €85 billion rescue package for Ireland in November, and a €78 billion bail-out for Portugal in May 2011.

This was the first eurozone crisis since its creation in 1999.