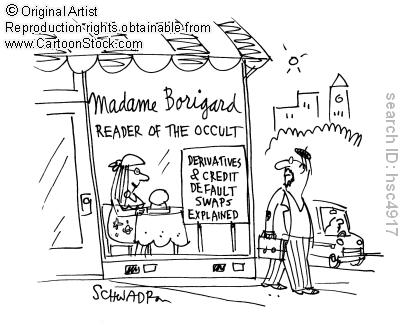 A credit default swap (CDS) is similar to a traditional insurance policy, inasmuch as it obliges the seller of the CDS to compensate the buyer in the event of loan default.

Generally, this involves an exchange or “swap” of the defaulted loan instrument (and with it the right to recover the default loan at some later time) for immediate money – usually the face value of the loan.

However, the difference between a traditional insurance policy and a CDS is that anyone can purchase one, even buyers who do not hold the loan instrument and may have no direct “insurable interest” in the loan.

The buyer of the CDS makes a series of payments (the CDS “fee” or “spread”) to the seller and, in exchange, receives a payoff if the loan defaults.

Credit default swaps have existed since the early 1990s, and increased in use after 2003.

Most CDSs are documented using standard forms promulgated by the International Swaps and Derivatives Association (ISDA), although some are tailored to meet specific needs.

CDSs have many variations. In addition to the basic, single-name swaps, there are:

In addition to corporations and governments, the reference entity can include a special purpose vehicle issuing asset backed securities.

CDSs are not traded on an exchange and there is no required reporting of transactions to a government agency.

During the 2007 – 2010 financial crisis the lack of transparency became a concern to regulators, as was the multi-trillion dollar size of the market, which could pose a systematic risk to the economy.