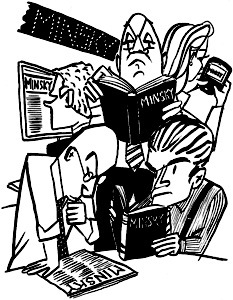 Back in the late 70’s, when most economists were extolling the virtues of financial deregulation and innovation, Hyman P. Minsky maintained a more negative view of Wall Street.

in fact, he noted that bankers, traders, and other financiers periodically played the role of arsonists, setting the entire economy ablaze.

Wall Street encouraged businesses and individuals to take on too much risk, he believed, generating ruinous boom-and-bust cycles.

The only way to break this pattern was for the government to step in and regulate the moneymen.

Many of Minsky’s colleagues regarded his “financial-instability hypothesis,” which he first developed in the nineteen-sixties, as radical, if not crackpot.

Minsky, who died in 1996, at the age of seventy-seven, earned a Ph.D. from Harvard and taught at Brown, Berkeley, and Washington University.

He didn’t have anything against financial institutions—for many years, he served as a director of the Mark Twain Bank, in St. Louis—but he knew more about how they worked than most deskbound economists.

There are basically five stages in Minsky’s model of the credit cycle:

A displacement occurs when investors get excited about something—an invention, such as the Internet, or a war, or an abrupt change of economic policy.

As the boom leads to euphoria, banks and other commercial lenders extend credit to ever more dubious borrowers, often creating new financial instruments to do the job.

Then, at the top of the market some smart traders start to cash in their profits.

The onset of panic is usually heralded by a dramatic effect.

You might think that the best solution is to prevent manias from developing at all, but that requires vigilance.

Since the nineteen-eighties, Congress and the executive branch have been conspiring to weaken federal supervision of Wall Street.

In order to be able to avoid all of the above, a good place to begin is with a statement from a paper co-authored by Minsky that “apt intervention and institutional structures are necessary for market economies to be successful.”

Rather than waging old debates about tax cuts versus spending increases, policymakers ought to be discussing how to reform the financial system so that it serves the rest of the economy, instead of feeding off it and destabilizing it.

Some of the problems are:

These are complex issues, with few easy solutions, but that’s what makes them interesting!