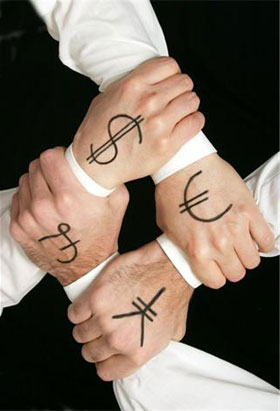 Imagine that you could borrow money at an extremely low rate of interest, or even interest-free.

You could then take that money and invest it in a certificate of deposit, bond, or other fixed income instrument, and collect interest.

Forex traders could borrow money from Japan at almost zero percent, and invest it in the U.S. at 5.25%.

Because of this, institutional traders piled into long positions in the USD/JPY currency pair to take advantage of this difference in interest rates.

The trouble is, this interest rate differential is now beginning to shrink.

The U.S. ended its campaign of rate hikes last year, and Japan began to raise rates. Now, instead of borrowing at zero percent, traders must pay 0.5% for money borrowed from Japan.

This makes the Carry Trade less attractive, and as a result, traders have rushed for the exit on USD/JPY.

Similar damage has been done to EUR/JPY and GBP/JPY, as the once weak Yen has come roaring back, reaching three-month highs against the Euro and U.S. Dollar.