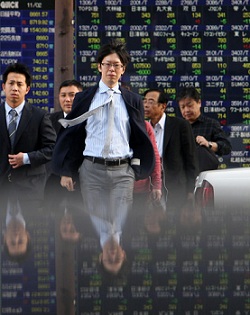 From the early 1960s to the late 1980s, Japan had one of the highest economic growth rates in the world.

In the 1970s, the government began to deregulate financial markets, which allowed banks to actively seek out new customers.

During the mid-1980s, Japan took a loose approach to monetary policy, which caused the money supply to increase and interest rates to fall.

The combination of these two actions was important to the creation of a speculative bubble:

The stock market bubble was fueled by a Japanese corporate invention, known as “zaitech,” or “Financial Engineering,” by which speculation became an integral part of corporate earnings statements.

After obtaining low-interest loans, corporations were easily able to raise funds on the markets.

While these funds sometimes fueled capital investment, they very often were recycled back into further speculative market activities again and again.

As the Japanese stockmarket kept zooming higher and higher, corporations were able to report their speculative profits as increased earnings.

Investors would then rush to purchase their stock, driving their prices and earnings even higher and providing more funds for the company’s speculative actions.

At the end of the decade, speculation dominated the activities of some businesses:

It was estimated that perhaps 40 to 50% of total reported profits from Japan’s largest corporations were derived from “zaitech!”

Land speculation was another important part of that bubble economy. Japanese land prices were traditionally high, partly due to the mountainous island nation’s small amount of available land.

Because of its high value, banks often accepted property as collateral for loans, and land served as the engine of credit for the entire economy.

By 1989, Japanese government officials were growing uneasy about the skyrocketing values of the stockmarket and land valuations.

In May 1989, it tightened monetary policy by raising interest rates, and ordered another hike on December 25.

While the stockmarket reached its all-time high on December 31, stock prices began to plummet in January.

The government increased interest rates five more times before August 1990, to try and halt the continued rise of property prices.

But as the stockmarket kept falling, it was forced to intervene in a futile attempt to try and revive the market and stave off recession.

Throughout the 1990s, Japan experienced slower growth than any other major industrial nation.