The European Union (EU) is a family of democratic European countries, committed to working together for peace and prosperity.

It is not a State intended to replace existing States, nor is it just an organisation for international cooperation.

The EU is, in fact, unique. Its member states have set up common institutions to which they delegate some of their sovereignty so that decisions on specific matters of joint interest can be made democratically at European level.

The historical roots of the European Union lie in the Second World War. The idea was born because Europeans were determined to prevent such killing and destruction ever happening again.

In the early years, the cooperation was between six countries and mainly about trade and the economy.

Now the EU embraces 28 countries, 4 million km² and 480 million people, and it deals with a wide range of issues of direct importance for our everyday life.

Europe is a continent with many different traditions and languages, but also with shared values such as democracy, freedom and social justice.

The EU defends these values. It fosters cooperation among the peoples of Europe, promoting unity while preserving diversity and ensuring that decisions are taken as close as possible to the citizens.

In the increasingly interdependent world of the 21st century, it is more necessary than ever for every European citizen to work together with people from other countries in a spirit of curiosity, openness and solidarity.

The subject of European Monetary Union (EMU) was an important and controversial issue for the members of the European Union since the date of the monetary and currency union — March 1, 2002.

While politicians and diplomats met and went forward with the formal arrangements for a single European currency, at the grass roots level there were considerable anxiety on the part of average EU citizens.

Will convergence bring economic prosperity, or will the measures required for entry into the EMU further depress the already stagnant job market in much of Europe?

These and other difficult questions will have to be addressed as one of the world’s largest regional trading blocs moved ahead.

The Euro and the European Monetary Union have numerous advantages!

Exporters are no longer at a disadvantage against their European competitors in the European internal market and in the markets of non-EU states as a result of devaluation of their competitors currencies.

Companies now have a reliable basis on which to plan.

Tourists will not any more have to exchange currency, which means their holidays will be cheaper.

The European currency (EURO) became a more important world reserve currency than before; and competition intensified by greater transparency in prices, which improved the efficiency of the European economies. This makes it possible to safeguard present jobs and certainly create new ones. 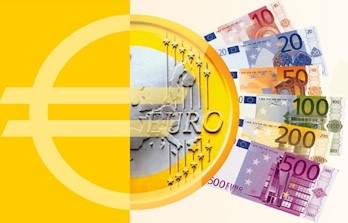 The sign for the new single European currency looks like an E with two clearly marked, horizontal parallel lines across.

It was inspired by the Greek letter EPSILON, in reference to the cradle of European civilization and to the first letter of the word “Europe.”

The two parallel lines across represent the stability of the Euro.

On March 1, 2002, the Euro became the official currency of the Member States of the European Union with a fixed conversion rate against their old national currencies.

From then on, the value of the Euro against the Dollar and all other currencies, including that of United Kingdom, which stayed out of the Euro zone is fluctuating according to market conditions.

Member States of the European Union: