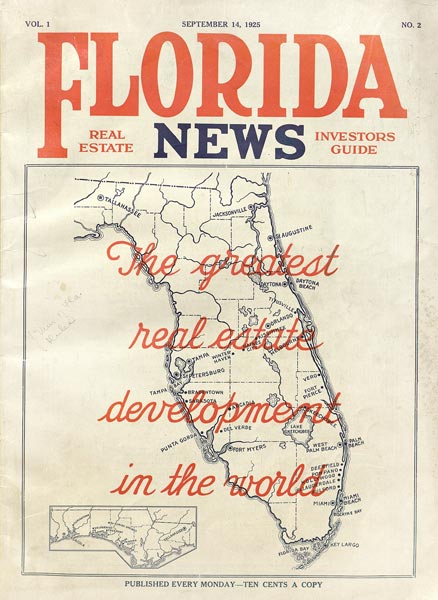 Real estate has always been one of the ways to make great fortunes!

As a matter of fact, both real estate and stock market have made more millionaires than any other investment.

The sad part is that most speculators in either of the two investments end up losing their shirt!

The era of extreme low interest rates, a smart propaganda that landlords are getting rich at the expense of their tenants, and everybody’s dream to own a house, no matter how outrageously it is priced, have resulted in prices going sky high!

In 1926 in Florida the real estate market declined from peak to bottom. Land that was bought for $1 million could, within six months, be resold for $4 million before crashing back down to the pre-boom $ 100,000 level.

The prices were so inflated that to buy a small property in 1926, you would’ve had to pay the same as you would now have to pay for a luxury home!

In the mid 20’s Florida became a popular destination for those who were seeking to escape the cold.

Unfortunately, housing could not keep up with the demand, so prices started to go up as more and more people started to compete for housing.

Soon speculators decided to jump in and before you knew it an flood of money was chasing limited housing.

Houses started to double and triple in value.

The only way to realize profits was to sell at a higher price than you paid for the house.

For a while everything was great but the supply of fools willing to pay such inflated prices for property eventually came to a halt.

Speculators began to sell their properties to get their profits while they could.

Then everybody simultaneously saw the “bubble”, and panic selling ensued.

That is when the situation abruptly changed and individuals started getting vaporized by the hundreds. Before you knew it, the prices had fallen down to pre boom levels.

If you look at the prices of some houses, you will see that after almost 90 years some houses are still selling for less than what the then owners paid for them.