At the same time, more than 1.7 million Americans now declare bankruptcy each year.

That’s more than a 300% increase in the last 15 years, even though the population has only risen about 20% in that time.

What’s more, the statistics also show that the situation is only getting worse.

Consumption is growing faster than income, and the national savings rate hovers in the 3-4% range. (It even dipped below 1% a few years ago, the first time that has happened since the Great Depression!)

Give into every impulse, save practically nothing, borrow as much as you can and let the devil take the hindmost!

But there are also some good news!

Despite the considerable marketing muscle of an out-of-control consumer culture, you can prevent your children or grandchildren from joining the “earn-it and burn-it” crowd.

You can teach them the difference between “good times” and good money habits, and you can help them actually begin to build wealth instead of debt, starting today.

From Tots to Tycoons

I don’t talk stocks with my eight-year-old, but ever since he was four he’s known exactly how much of each dollar he gets to put into the “spending” box on his dresser and how much goes into his “permanent savings.”

This isn’t difficult for him because he knows he can spend his money from the “spending” anytime on whatever he wants ­ candy, “Magic” cards or comics.

Or he can create a “temporary savings” box for bigger items he might have his eye on, like a skateboard or computer game.

The “permanent savings,” however, he never spends or borrows from for any reason at all.

The permanent savings are for one thing and one thing only ­building wealth.

Every few months, he, his older brothers and I sit down and we count out the money from their individual “permanent savings” boxes.

I then take that money and put it into the custodial investment accounts I’ve set up for each of them.

I invest that money in mutual funds invested in sectors of the market that are markedly down from their highs.

These are the kind of investments that might be volatile in the short term, but that tend to outperform the market over the long term.

And the long term is where kids really shine when it comes to investing.

In fact, it’s one of the great advantages they have as young investors!

Children Have Three Fundamental Advantages over the World’s Greatest Investors

Warren Buffet is considered the greatest investor who ever lived.

He went from being a young college grad with very little money to amassing a personal fortune in excess of $30 billion, and he did it all from investing.

But there are three key areas where your children have major advantages even over Warren Buffet.

Your children have no bills to pay, no rent, no car loans, and no groceries to buy.

They don’t have other people to take care of.

Yet, they do have income!

Even if it’s just a few dollars a week, teach them to save and invest while they’re at home (and have no expenses) and the results will be truly amazing. 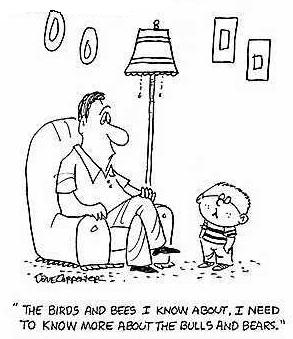 That’s quite a sum for someone so young.

And easily achievable even if they only make an average income as an adult.

What’s more, this only assumes the long-term annual average returns of the market for the entire 20th century, 12%, including bull and bear markets.

After all, they’re investing for the long term and so can target the most downtrodden mutual fund categories.

And history tells us these are likely to produce the highest returns over the long term.

Once we add this technique, the results are even more remarkable.

In his book What Works on Wall Street, he reported that investing in value stocks with an emphasis on earnings growth produced 18.4% returns between 1952 and 1994.

If your children get these kinds of returns, their $2 a day through the age of 21 and reasonable savings and investment ratios as adults will turn into $673,137 by the age of 30!

And within three years after that, they’d have over $1 million by the age of 33 ­ even if we suppose they never had an above-average-paying job in their lives!

These are examples of the power of investing early.

But to make it work, you also have to take advantage of children’s other unique strengths as young investors, including…

A Great Capacity to Learn!

During childhood, we have a greater capacity to learn than at any other time in our lives.

This, for instance, is why it’s so much easier to learn a second language when you’re very young.