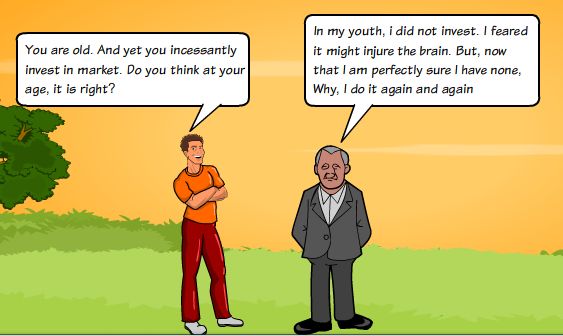 At a country-club party a young stockbroker was introduced to an attractive girl.

Immediately he began paying her court and flattering her outrageously.

The girl liked the young man, but she was taken a bit aback by his fast and ardent pitch. She was amazed when after 30 minutes he seriously proposed marriage.

“Look,” she said. “We only met a half hour ago. How can you be so sure? We know nothing about each other.”

“You’re wrong,” the young stockbroker declared. “For the past 5 years I’ve been working in the brokerage firm where your father has his account.”

Technical analysis is the art of drawing a crooked line from an unproved assumption to a foregone conclusion.

The First Law of Market Analysis: For every analysis, there exists an equal and opposite analysis.

The Second Law of Market Analysis: They’re both wrong!

Two stock brokers, Jon and James, head out for their usual 18 holes of golf.

Jon offers James a $50 bet. James agrees and they’re off.

They shoot a great game. After the 8th hole, James is ahead by one stroke, but cuts his ball into the rough on the 9th. “Help me find my ball. Look over there,” he says to Jon.

After a few minutes, neither has any luck. Since a lost ball carries a four point penalty, James secretly pulls a ball from his pocket and tosses it to the ground. “I’ve found my ball!” he announces.

“After all of the years we’ve been partners and playing together,” Jon says, “you’d cheat me out of a lousy 50 bucks?”

“What do you mean, cheat? I found my ball sitting right there!” “And you’re a liar, too!” Jon says. “I’ll have you know I’ve been STANDING on your ball for the last five minutes!” 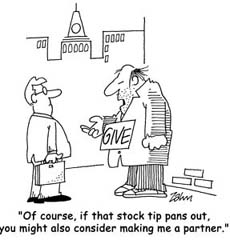 QUESTION: How do you get a stockbroker down from a tree?

VALUE INVESTING: The art of buying low and selling lower.