An interest rate is the cost of borrowing money.

The borrower pays interest in order to spend money now, instead of waiting until he’s saved the same amount.

Interest rates are expressed as an annual percentage of the total amount borrowed, also known as the principle.

The interest a lender receives is his compensation for taking a risk.

With every loan, there’s a risk that the borrower won’t be able to pay it back.

That’s why maintaining a good credit score will help lower the interest rates offered to you by lenders.

The nice thing is that interest rates work both ways!

Banks, governments and other large financial institutions need cash too and they’re willing to pay for it.

If you put money into a savings account at a bank, the bank will pay you interest for the use of your money.

Governments sell bonds and other securities for the same reason.

In this case, you are the lender and the interest rate is your compensation for giving up the ability to spend your money.

Unfortunately, savings accounts and government-issued bonds pay relatively low interest rates because the risk of defaulting is close to zero.

A borrower’s credit score is only one of the risk factors that affect interest rates. 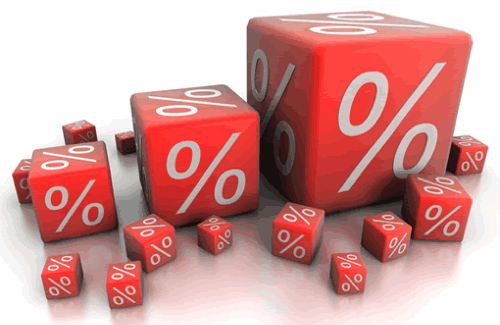 Secured credit is backed by collateral.

A mortgage is the classic example of secured credit, because if the borrower defaults on the loan, the bank can always take the house.

Credit cards are unsecured credit, because there’s no collateral backing the loan, only the cardholder’s credit score.

Long-term loans also carry higher interest rates than short-term loans, because the more time a borrower has to pay back a loan, the more time there is for things to go rotten financially, causing the borrower to default.

Another factor that makes long-term loans less attractive to lenders – and therefore raises long-term interest rates is the rate of inflation.

In a healthy economy, inflation almost always rises, meaning the same dollar amount today is worth less in ten years from now.

Lenders know that the longer it takes the borrower to pay back a loan, the less that money is going to be worth.

A. The nominal rate is the interest rate set by the lending institution and

B. The real rate is the nominal rate minus the rate of inflation.

For example, if you have a mortgage with a nominal interest rate of 12%, but the annual rate of inflation is 5%, then the bank is only really collecting 7% on the loan.