For those unfamiliar with the term, FOREX (FOReign EXchange market), refers to an international exchange market where currencies are bought and sold.

The Foreign Exchange Market that we see today began in the 1970’s, when free exchange rates and floating currencies were introduced.

In such an environment only participants in the market determine the price of one currency against another, based upon supply and demand for that currency.

FOREX is a somewhat unique market for a number of reasons:

1. It is one of the few markets in which it can be said with very few qualifications that it is free of external controls and that it cannot be manipulated.

2. It is also the largest liquid financial market, with trade reaching between 1 and 1.5 trillion US dollars a day. With this much money moving this fast, it is clear why a single investor would find it near impossible to significantly affect the price of a major currency.

3. Furthermore, the liquidity of the market means that unlike some rarely traded stock, traders are able to open and close positions within a few seconds as there are always willing buyers and sellers.

4. Another somewhat unique characteristic of the FOREX money market is the variance of its participants.

Investors find a number of reasons for entering the market, some as longer term hedge investors, while others utilize massive credit lines to seek large short term gains.

Interestingly, unlike blue-chip stocks, which are usually most attractive only to the long term investor, the combination of rather constant but small daily fluctuations in currency prices, create an environment which attracts investors with a broad range of strategies.

Transactions in foreign currencies are not centralized on an exchange, unlike say the NYSE, and thus take place all over the world via telecommunications.

In almost every time zone around the world, there are dealers who will quote all major currencies.

After deciding what currency the investor would like to purchase, he or she does so via one of these dealers (some of which can be found online).

It is quite common practice for investors to speculate on currency prices by getting a credit line (which are available to those with capital as small as $500), and vastly increase their potential gains and losses.

This is called marginal trading.

Marginal trading is simply the term used for trading with borrowed capital.

It is appealing because of the fact that in FOREX investments can be made without a real money supply.

This allows investors to invest much more money with fewer money transfer costs, and open bigger positions with a much smaller amount of actual capital. 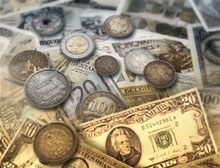 Thus, one can conduct relatively large transactions, very quickly and cheaply, with a small amount of initial capital.

Marginal trading in an exchange market is quantified in lots.

You believe that signals in the market are indicating that the British Pound will go up against the US Dollar.

You open 1 lot for buying the Pound with a 1% margin at the price of 1.49889 and wait for the exchange rate to climb.

At some point in the future, your predictions come true and you decide to sell. You close the position at 1.5050 and earn 61 pips or about $405.

(Just as an example of how exchange rates change in the course of a day, an average daily change of the Euro (in Dollars) is about 70 to 100 pips.)

When you decide to close a position, the deposit sum that you originally made is returned to you and a calculation of your profits or losses is done.

This profit or loss is then credited to your account.

The two fundamental strategies in investing in FOREX are Technical Analysis and Fundamental Analysis.

Most small and medium sized investors in financial markets use Technical Analysis.

This technique stems from the assumption that all information about the market and a particular currency’s future fluctuations is found in the price chain.

That is to say, that all factors which have an effect on the price have already been considered by the market and are thus reflected in the price.

Essentially then, what this type of investor does is base his/her investments upon three fundamental suppositions.

A. That the movement of the market considers all factors,

B. That the movement of prices is purposeful and directly tied to these events and

C. That history always repeats itself.

Someone utilizing technical analysis looks at the highest and lowest prices of a currency, the prices of opening and closing, and the volume of transactions. 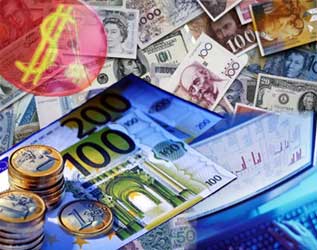 This investor does not try to outsmart the market, or even predict major long term trends, but simply looks at what has happened to that currency in the recent past, and predicts that the small fluctuations will generally continue just as they have before.

A Fundamental Analysis is one which analyzes the current situations in the country of the currency, including such things as its economy, its political situation, and other related rumors.

By the numbers, a country’s economy depends on a number of quantifiable measurements such as its Central Bank’s interest rate, the national unemployment level, tax policy and the rate of inflation.

An investor can also anticipate that less quantifiable occurrences, such as political unrest or transition will also have an effect on the market.

Before basing all predictions on the factors alone, however, it is important to remember that investors must also keep in mind the expectations and anticipations of market participants.

For just as in any stock market, the value of a currency is also based in large part on perceptions of and anticipations about that currency, not solely on its reality.

FOREX investing is one of the most potentially rewarding types of investments available.

While certainly the risk is great, the ability to conduct marginal trading on FOREX means that potential profits are enormous relative to initial capital investments.

Another benefit of FOREX is that its size prevents almost all attempts by others to influence the market for their own gain.

So that when investing in foreign currency markets one can feel quite confident that the investment he or she is making has the same opportunity for profit as other investors throughout the world.

While investing in FOREX short term requires a certain degree of diligence, investors who utilize a technical analysis can feel relatively confident that their own ability to read the daily fluctuations of the currency market are sufficiently adequate to give them the knowledge necessary to make informed investments.