The Bernstein Declaration on the Principles and Possibilities of Capitalism

Capitalism is the only system based on the recognition that each individual owns his life.

Capitalism is the only social system in which individuals are free to pursue their rational self-interest, to own property and to profit from their actions.

The More Capitalist a Culture…

The Greater its Freedom and Prosperity!

That is the verdict of history.

In just two short centuries, capitalism has lifted men’s living standards to heights undreamed of in the pre-capitalist era.

Often forgotten today is that Western Europe, prior to the capitalist revolution of the late Eighteenth Century, suffering under the political yoke of the feudal aristocracy, was the equivalent of a Third World country – wracked by famine, recurrent plague, and the most unspeakable poverty.

When was the last time a famine occurred in any capitalist nation – whether in Western Europe, North America or Asia?

The United States has never suffered a famine in its history.

Capitalism has created abundance unmatched in human history, enabling hundreds of millions to live better today than all the kings of yesterday.

But the non capitalist nations – the fascist, socialist, military or theocratic dictatorships – enslave their own citizens and subsist in abysmal squalor. In many African countries the living standard is one or two hundred dollars per year.

In North Korea, they starve to death by the tens of thousands.

In Cuba, they drown trying to swim to freedom in the United States.

Millions of oppressed people around the globe yearn to emigrate to the Free World.

But who in the capitalist nations seeks to emigrate to Cambodia?

What principles explain the fact that mankind’s greatest inventions and works of art – his most life-giving material and spiritual advances – the steam engine, the cinema, the telegraph, the telephone, the electric light, the novel, the automobile, the symphony, the airplane, the radio, the television, the personal computer, the Internet and countless medical cures – were created under capitalism?

The Simple Answer Is: 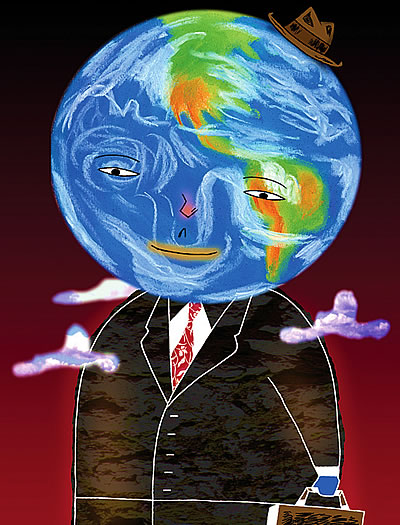 When men are free to pursue their rational self-interest, when they are free to use their minds in the quest to profit and better their lives, they are magnificently productive.

The political/economic freedom of capitalism liberates the best minds and the most ambitious men to build, to create, to innovate, to invent, to advance human well-being and happiness.

Mankind’s greatest inventor, Thomas Edison, in his laboratory at Menlo Park, specifically tailored his projects toward the purpose of profitability.

He, and so many of the other great inventors and industrialists responsible for raising men’s living standards, earned and enjoyed great wealth.

Left free – under capitalism – to create, produce, and build for personal gain they consequently raised the living standards of all.

Involved in this is a deeper principle: Capitalism is the system of the mind.

The mind is man’s fundamental survival instrument, just as wings are a bird’s.

It is only by means of rational thinking and productive work that man can raise his living standards and increase his life expectancy.

But the mind does not function under coercion.

The mind cannot be enslaved.

Capitalism flourishes because it is the only system of free minds, free men and free markets.

The greatest thinkers and activists of history – from Aristotle to John Locke, from Thomas Jefferson to Adam Smith, Ludwig von Mises, and Ayn Rand – have recognized, fought for, and glorified the freedom of man’s mind.

They have understood that when men are oppressed, the rational mind is stifled, and the darkness of barbarism follows.

But when men are free to think and to act on their thinking, when the mind is liberated, the Renaissance and the Enlightenment are possible.

Freedom Is Freedom of the Mind

It is no accident that man’s freest periods have seen his greatest achievements.

From the Golden Age of Athens to the Italian Renaissance to the technological and industrial breakthroughs of the United States, the freedom of man’s mind has led to magnificent advances in philosophy, the arts and science.

This is the promise and the possibility of capitalism.

This is the Capitalist Vision. It is our vision!