A candlestick chart is a style of bar-chart used primarily to describe price movements of an equity over time.

It is a combination of a line-chart and a bar-chart, in that each bar represents the range of price movement over a given time interval.

It is most often used in technical analysis of equity and currency price patterns.

They appear superficially similar to error bars, but are unrelated.

Candlestick charts are said to have been developed in the 18th century by a legendary Japanese rice trader.

The charts gave the traders an overview of open, high, low, and close market prices over a certain period.

This style of charting is very popular due to the level of ease in reading and understanding the graphs.

Since the 17th century, there has been a lot of effort to relate chart patterns to the likely future behavior of a market.

This method of charting prices proved to be particularly interesting, due to the ability to display five data points instead of one.

The Japanese rice traders also found that the resulting charts would provide a fairly reliable tool to predict future demand. 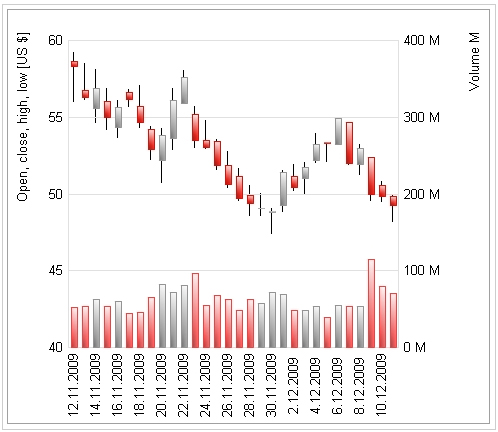 The method was picked up by Charles Dow around 1900 and remains in common use by today’s traders of financial instruments.

Candlesticks are usually composed of the body (black or white), an upper and a lower shadow (wick).

Candlestick charts are a visual aid for decision making in stock, forex, commodity, and options trading.

For example, when the bar is white and high relative to other time periods, it means buyers are very bullish.

The opposite is true for a black bar.