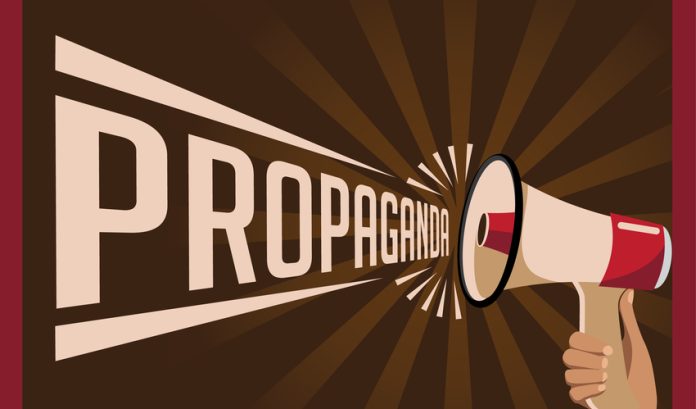 1. The spreading of ideas, information, or rumor for the purpose of helping or injuring an institution, a cause, or a person.

2. Ideas, facts, or allegations spread deliberately to further one’s cause or to damage an opposing cause; also: a public action having such an effect.

3. Financial and or economic “news” in order to manipulate certain financial products.

Wartime propagandists simplify intricate grey complexities into the simple black and white of “THEM AGAINST US!”

“Let there be no doubt: Most large states have piled up more war material than ever before. It is war material that threatens to become obsolete, but still threatens distrustful nations with a terrible powder keg.”

“The slightest cause, like that cursed shot fired in Sarajevo — perhaps from the pistol of a fool — might suffice to bring forth armies of millions, against the will of the affected peoples. Whole regions might be plowed up by tens of thousands of shells of every size and weight, cities and villages might be transformed into seas of flame, all life might perish in clouds of gas.”

From the July 1934 speech by Rudolf Hess, who claimed that because the Nazi leadership had experienced the horrors of trench warfare during World War I, they now favored peace!

Rudolf Hess was the “Stellvertreter des Fuhrers” (Deputy of the Fuehrers) of Adolf Hitler.