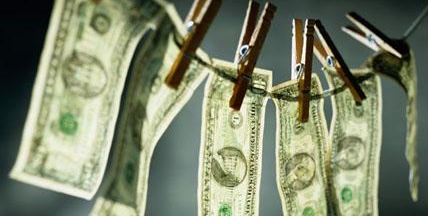 Money laundering, the “cleaning of money” with regard to appearances in law, is the practice of engaging in specific financial transactions in order to conceal the identity, source, and/or destination of money, and is a main operation of underground economy.

In the past, the term “money laundering” was applied only to financial transactions related to organized crime.

Today its definition is often expanded by government regulators to encompass any financial transaction which generates an asset or a value as the result of an illegal act, which may involve actions such as tax evasion.

As a result, the illegal activity of money laundering is now recognized as potentially practiced by individuals, small and large businesses, corrupt officials, terrorists, members of organized crime, and even corrupt states, through a complex network of “shell” companies and trusts based in offshore tax havens.

The term “money laundering” does not derive, as is often said, from the Al Capone having used laundromats to hide ill-gotten gains.

It was Meyer Lansky who perfected money laundering’s older brother, “capital flight,” transferring his funds to Switzerland and other offshore places.

The first reference to the term “money laundering” itself actually appears during the Watergate scandal.

US President Richard Nixon’s “Committee to Re-elect the President” moved illegal campaign contributions to Mexico, then brought the money back through a company in Miami. It was Britain’s Guardian newspaper that coined the term, referring to the process as “laundering.”

After September 11, 2001, money laundering became a major concern of the war on terror.

Refers to the initial point of entry for funds derived from criminal activities.

Refers to the creation of complex networks of transactions which attempt to obscure the link between the initial entry point, and the end of the laundering cycle.

Refers to the return of funds to the legitimate economy for later extraction.

If a person is making thousands of dollars a week from a business (not unusual for a store owner) and wishes to deposit that money in a bank, it cannot be done without possibly drawing suspicion.

In the United States, for example, cash transactions and deposits of more than $10,000 are required to be reported as “significant cash transactions” to the Financial Crimes Enforcement Network (FinCEN), along with any other suspicious financial activity which is identified as “suspicious activity reports.”

One method of keeping this small change private would be for an individual to give money to an intermediary who is already legitimately taking in large amounts of cash.

The intermediary would then deposit that money into an account, take a premium, and write a “clean” check to the individual.

Thus, the individual draws no attention to himself, and can deposit his check into a bank account without drawing suspicion.

This works well for one-off transactions, but if it occurs on a regular basis then the check deposits themselves will form a paper trail and could raise suspicion.

Another method involves establishing a business whose cash inflow cannot be monitored, and funneling the small change into this business and paying taxes on it. 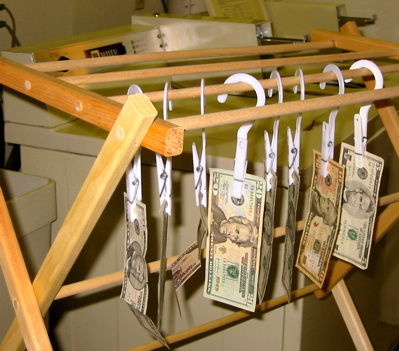 All bank employees however are trained to be constantly on the lookout for any transactions which appear to be an attempt to get around the currency reporting requirements.

Such shell companies should deal directly with the public, perform some service-related activity as opposed to providing physical goods, and reasonably accept cash as a matter of business.

Since it would be unreasonable for them to keep track of the identity of their customers, a record of their transaction amounts must be ostensibly accepted as primae facia evidence of actual financial activity.

Reasonably accepting cash means the business must regularly perform services that total less than $500 on average, since above that amount most people pay with a check, credit card, or other traceable payment method.

Therefore the legitimate business will generate a legitimate level of parts usage, as well as enough traceable transactions to mask the illegitimate ones.

Each of the above examples is flawed in one or more ways and serves only to illustrate the specific feature being discussed.

The hairstylist example is flawed because the hairsylist would have to account for their employees, while plumbers usually provide warranties on their work, which necessarily includes the names and addresses of the customers.

Corrupt politicians and lobbyists also launder money by setting up personal non-profits to move money between trusted organizations, so that donations from inappropriate sources may be illegally used for personal gain.