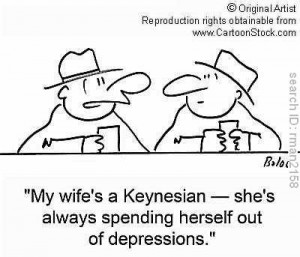 Keynesian economics also called Keynesianism and Keynesian theory is a school of macroeconomic thought based on the ideas of 20th-century English economist John Maynard Keynes.

Advocates of Keynesian economics argue that private sector decisions sometimes lead to inefficient macroeconomic outcomes, which require active policy responses by the public sector, particularly monetary policy actions by the central bank and fiscal policy actions by the government to stabilize output over the business cycle.

The theories forming the basis of Keynesian economics were first presented in “The General Theory of Employment, Interest and Money,” published in 1936.

The interpretations of Keynes are contentious and several schools of thought claim his legacy.

Keynesian economics advocates a mixed economy – predominantly private sector, but with a significant role of government and public sector – and served as the economic model during the later part of the Great Depression, World War II, and the post-war economic expansion (1945–1973), though it lost some influence following the tax surcharge in 1968 and the stagflation of the 1970s.

The advent of the global financial crisis in 2008 has caused a resurgence in Keynesian thought.

According to Keynesian theory, some individually-rational microeconomic-level actions – if taken collectively by a large proportion of individuals and firms – can lead to inefficient aggregate macroeconomic outcomes, wherein the economy operates below its potential output and growth rate.

Such a situation had previously been referred to by classical economists as a general glut.

There was disagreement among classical economists on whether a general glut was possible.

Keynes contended that a general glut would occur when aggregate demand for goods was insufficient, leading to an economic downturn.

Losses of potential output due to unnecessarily high unemployment is the result. Producers then react defensively (or reactive) making decisions that damage macroeconomics.

Most Keynesians advocate an active stabilization policy to reduce the amplitude of the business cycle, which they rank among the most serious of economic problems.

For example, when the unemployment rate is very high, a government can use a dose of expansionary monetary policy.

Keynes argued that the solution to the Great Depression was to stimulate the economy (“inducement to invest”) through some combination of two approaches:

A. A reduction in interest rates, and

B. Government investment in infrastructure. Investment by government injects income, which results in more spending in the general economy.

This in turn stimulates more production and investment involving still more income and spending and so forth.

The initial stimulation starts a cascade of events, whose total increase in economic activity is a multiple of the original investment.

A central conclusion of Keynesian economics is that, in some situations, no strong automatic mechanism moves output and employment towards full employment levels.

This conclusion conflicts with economic approaches that assume a strong general tendency towards equilibrium.

In the ‘neoclassical synthesis’, which combines Keynesian macro concepts with a micro foundation, the conditions of general equilibrium allow for price adjustment to eventually achieve this goal.

More broadly, Keynes saw his theory as a general theory, in which utilization of resources could be high or low, whereas previous economics focused on the particular case of full utilization.