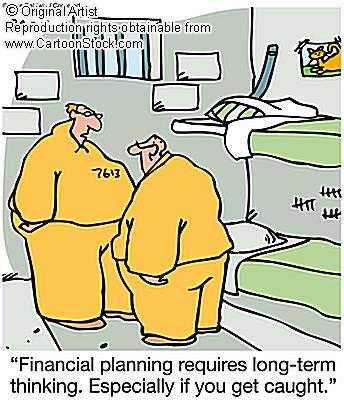 The CIA had an opening for a new agent.

After all of the background checks, interviews, and testing were done there were three finalists – a mathematician, a doctor and a stockbroker.

For the final test, the CIA agents took the mathematician to a large metal door and handed him a gun. “We must know that you will follow your instructions, no matter what the circumstances. Behind this door you will find your wife sitting in a chair. You have to kill her!” The mathematician said, “You can’t be serious. I could never shoot my wife.” The agent replies, “Then you’re not the right man for this job.”

The doctor was given the same instructions. He took the gun and went into the room. All was quiet for about five minutes. Then the doctor came out with tears in his eyes. “I tried, but I can’t kill my wife.” The agent replies, “You don’t have what it takes. Take your wife and go home.”

Finally, it was the stockbroker’s turn. He took the gun and went into the room. Shots were heard, one shot after another. They heard screaming, crashing, banging on the walls. After a few minutes, all was quiet.

The door opened slowly and there stood the stockbroker. He wiped the sweat from his brow and said, “You guys didn’t tell me the gun was loaded with blanks. So I had to beat her to death with the chair!”

If investments are keeping you awake at night, sell down to the sleeping point!

With money in your pocket, you are wise and you are handsome and you sing well too!

I’ve got all the money I’ll ever need, if I die by four o’clock!

If you’re given a choice between money and sex appeal, take the money. As you get older, the money will become your sex appeal!

A Financial Planner is a guy who says to client:

I’ve reviewed your financial picture, and if we manage your money properly, there should be plenty for both of us.

An Institutional Investor is past year’s investor who’s now locked up in a nut house.

A Stock Split is when your ex-wife and her lawyer split all your assets equally between themselves.

VALUE INVESTING: The art of buying low and selling lower.

BULL MARKET: A random market movement causing an investor to mistake himself for a financial genius.

BOND: What you had with your spouse until you pawned his/her golf clubs to invest in stocks.

BROKER: The person you trust to help you make major financial decisions. Please note the first five letters of this word spell “Broke.”

Don’t try to buy at the bottom and sell at the top. It can’t be done except by liars.

BULL: What comes out of your stockbroker’s mouth.

If you hear that everybody is buying a certain stock, ask who is selling.

Take all your savings and buy some good stock and hold it till it goes up, then sell it.